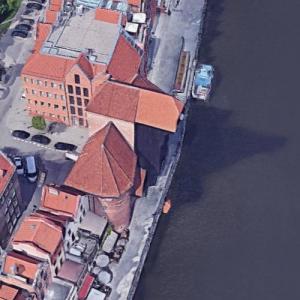 By pothkan @ 2005-07-04 12:45:06
@ 54.3502771, 18.6575091
Gdansk, Poland (PL)
The oldest documented mention of Zuraw as a wooden port crane was in 1367. What you see today, however, was reconstructed in the middle of the 15th century after a devastating fire devoured the original structure. The large crane was used to place masts on ships and to load cargo. During World War II, the wooden area was destroyed and only 60% of the brick portion remained in tact. After the war, Zuraw was once again rebuilt and handed over to the museum. Today you can find different exhibits detailing the interesting history of the entire port of Gdansk. The crane is home to a branch of the Maritime Museum.
Links: pl.wikipedia.org, www.local-life.com
1,219 views