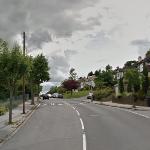 By kkeps @ 2013-11-24 17:05:21
@ 51.347456, -0.105029
Purley, United Kingdom (GB)
The 1924 Imperial Airways de Havilland DH.34 crash occurred on 24 December 1924 when de Havilland DH.34 G-EBBX of Imperial Airways crashed at Purley, Surrey, United Kingdom killing all eight people on board. The aircraft was operating a scheduled international flight from Croydon, Surrey, to Paris, France. It was the first fatal accident suffered by Imperial Airways and led to the first public inquiry into a civil aviation accident in the United Kingdom. As a result of issues brought up during the Public Inquiry, Croydon Airport was expanded, absorbing most of Beddington Aerodrome.
Links: en.wikipedia.org
526 views