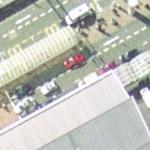 By dda @ 2007-06-30 15:20:17
@ 55.864101, -4.432775
Glasgow, United Kingdom (GB)
Glasgow International Airport in Glasgow, Scotland has been evacuated after reports surfaced that a green Jeep Cherokee struck the airport's terminal building, and burst into flames at 3:11pm BST. An eyewitness told the BBC that "[A] man was on fire." All flights are grounded, and two men have been arrested and the United Kingdom has raised their threat level to "critical" which means another terror attack "is expected imminently."
Eyewitnesses described a Jeep Cherokee being driven at speed towards the building with flames coming out from underneath. They also reported as seeing two Asian men in the car, one of whom was on fire.
Links: en.wikinews.org
987 views