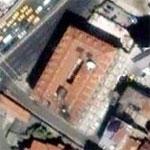 Hotel Pera Palace is a historical four-star hotel located in the Tepebaşı neighborhood of Beyoğlu (Pera) district in Istanbul, Turkey. It was built in 1892 for the purpose of hosting the passengers of the Orient Express and was named after the place it is located. It holds the title of "the oldest European hotel of Turkey".
Links: en.wikipedia.org
956 views