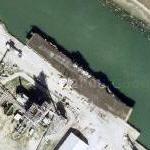 Faced with costly maintenance for an ever-growing fleet of inactive ships, the Navy began exploring alternatives. One possibility was working with maritime communities to incorporate vessels in their waterfront attractions. The Navy designated the Oriskany for the reefing project in 2003, when Pensacola civic boosters and the Florida Fish and Wildlife Conservation Commission expressed interest in developing a place where sea life could congregate and multiply, and thousands of visitors could come to catch or observe them. The ship was towed to Corpus Christi, Texas, for pre-sinking preparations, then here [Pensacola, FL] for its final port call on March 22."
1,512 views