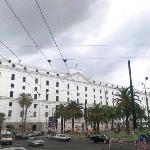 By kkeps @ 2010-01-30 14:55:14
@ 40.862106, 14.266419
Naples, Italy (IT)
The Albergo Reale dei Poveri (Italian Bourbon Hospice for the Poor) is a former public hospital/almshouse in Naples, southern Italy. It was designed by the architect Ferdinando Fuga, and construction was started in 1751. It is five stories tall and about 300 meters long. It was popularly known as "Palazzo Fuga". King Charles III of the House of Bourbon meant the facility to house the destitute and ill, as well as to provide a self-sufficient community where the poor would live and work. The building was originally designed with five courtyards and a church in the centre, but only the three innermost courtyards were built, and plans to complete the building according to the original design were finally abandoned in 1819. The building is the center of Naples, which is included in UNESCO World Heritage List.

It is no longer a hospital, and has suffered much from neglect and earthquakes. The center behind the entrance is used for exhibitions, conferences, and concerts. Recently (2006) the façade has undergone restoration as part of an as yet ill-defined plan to incorporate the facility into the working infrastructure of public buildings in Naples.
Links: en.wikipedia.org
607 views