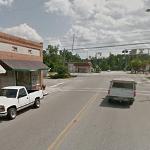 By qstone @ 2012-08-16 21:34:56
@ 32.850664, -81.07991
Varnville, South Carolina (SC), US
This is the filming location of "Greenbow, Alabama" for the 1994 romance/drama "Forrest Gump" starring Tom Hanks, Robin Wright, Gary Sinise and Sally Field - it is the small town of Varnville, SC and was chosen for its quaint small town feel and its similarities to the paintings of Norman Rockwell for director Robert Zemeckis.

The film depicts several decades in the life of Forrest Gump, a slow-witted and naïve, but good-hearted and athletically prodigious, man who witnesses, and in some cases influences, some of the defining events of the latter half of the 20th century in the United States. When it was released in 1994, Forrest Gump became a commercial success as the top grossing film in North America released that year, earning over $677 million worldwide, and won the Academy Award for Best Picture, Best Director for Robert Zemeckis, Best Actor for Tom Hanks, Best Adapted Screenplay for Eric Roth, Best Visual Effects, and Best Film Editing.

In the movie, Greenbow is the hometown of Forrest Gump and Jenny Curran. It is where they both attended public school despite Forrest's IQ being below the cut-off (and his mother, played by Sally Field reassures him that he is no different from the other children saying, "stupid is as stupid does"). Throughout the early parts of movie in Greenbo, Forrest has to wear leg braces and is made fun of for them - but while fleeing from bullies one day, Forrest's leg braces break apart and he discovers that he can run very fast while Jenny yells "Run Forrest, Run!" after him. This leads to Forrest's entry to the University of Alabama (playing for Bear Bryant), and launches him into the witnessing, and in some cases influencing, some of the defining events of the latter half of the 20th century in the United States.
Links: www.imdb.com, www.youtube.com
48,610 views