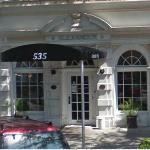 By kkeps @ 2008-10-12 16:13:35
@ 27.771127, -82.640973
St Petersburg, Florida (FL), US
Built in 1919 and listed on the National Register of Historic Places, the Alexander Hotel is significant for its association with the changing character of the hotel and lodging industry in St. Petersburg. During the second decade of the twentieth century, lodging in the city evolved from small scale, mainly frame boarding houses and hotels built before the World War I era to the large, masonry hotels built in the boom years from 1921 to 1926. Hotels built in St. Petersburg before 1920 were small, with usually less than 50 rooms, and entirely financed by their owner-operators. The first hotels built after the war in St. Petersburg -- the Alexander, Ponce de Leon and the Cordova, the latter two built in 1921 -- showed a change to masonry construction and architectural sophistication but remained small in size. This shift in hotel type was a reflection of the growing wealth of the American economy in this period and the increased popularity of Florida as a winter tourist destination.
453 views