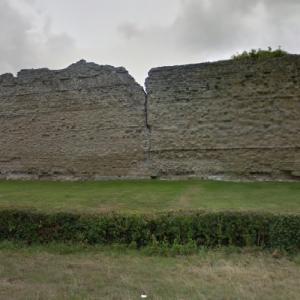 By Drudii @ 2017-09-13 12:00:32
@ 50.8194615, .331078
Pevensey, United Kingdom (GB)
Anderitum is a Roman fortress located in eastern Pevensey in the English county of East Sussex. The fortress dates back to 290. It is estimated that the construction of the fortress lasted for 160.000 man-days (the equivalent of 285 men spending two years building it). The fortress was surrounded by massive walls with huge entry gates. The wall was not built all at once but instead was built in segments - the vertical breaks in the stonework can still be seen today.

The fortress was abandoned when the Roman Empire retreated from Great Britain in 410. It is thought not long after the abandonment that civilians moved into the fort to protect themselves from Saxon raiders. In 1100 a medieval castle was built on part of the fortress. The castle and most of the Roman wall still remains today.
Links: en.wikipedia.org
314 views