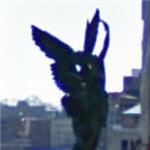 A heritage monument, this bronze figurative sculpture depicts an angel carrying a dead soldier and commemorates those who lost their lives in World War I. This is one of three identical statues commissioned by the Canadian Pacific Railway in 1921 to honour their workers who answered the call of "king and country" and made the ultimate sacrifice. The others are in Winnipeg and Montreal. The angel originally held a full wreath in her upraised hand. After WW II, the dates of that war were also added to the plaque.

The artist won the CPR commission from a nation-wide competition.
Links: vancouver.ca
525 views