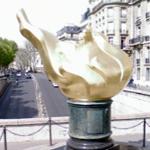 By dda @ 2008-07-02 19:07:42
@ 48.864193, 2.300986
Paris, France (FR)
The Flame of Liberty (Flamme de la Liberté) in Paris is a full size, gold leaf covered, replica of the flame carried in the hand of the Statue of Liberty in New York City. It was given to the city of Paris by the International Herald Tribune on behalf of donors as part of the newspaper's centennial celebrations in 1987. It is located near the northern end of the Pont de l'Alma on the Place de l'Alma in Paris.

For several years, the public fly-posted the base with commemorative material in honour of Diana, Princess of Wales, because the memorial is very close to the tunnel where she died. The material has since been removed by the French authorities. However, it is still regarded by many as an unofficial memorial to the late princess.
Links: en.wikipedia.org
4,487 views