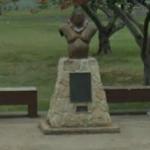 His voice became famous outside Hawaii when his album Facing Future was released in 1993. His medley of "Somewhere over the Rainbow/What a Wonderful World" was subsequently featured in several films, television programs, and television advertisement commercials.

Through his skillful ukulele playing and incorporation of other genres (such as jazz and reggae), Kamakawiwoʻole's music remains a very strong influence in Hawaiian music.
Links: en.wikipedia.org, www.flickr.com
6,817 views