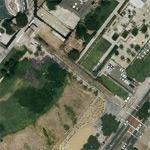 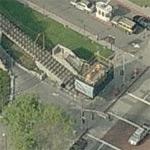 By neotrix @ 2008-08-30 06:14:28
@ 34.051176, -118.249848
Los Angeles, California (CA), US
Angels Flight is a landmark funicular railway in the Bunker Hill district of downtown Los Angeles, California, which claims to be the "shortest railway in the world". But shorter ones are contained in the item below listing other funiculars - notably the three in Bournemouth, England. The funicular has operated on two slightly different sites, using the same cars. The first Angels Flight operated from 1901 until it was closed in 1969 when its location was redeveloped. The second reopened nearby in 1996, and closed again in 2001 after a serious accident. The second funicular still exists but does not operate, and it has been scheduled to reopen on several occasions.[3] In early 2008, the Los Angeles Downtown News reported that the railway would reopen "soon".

Angels Flight was added to the National Register of Historic Places on October 13, 2000.
Links: en.wikipedia.org
1,543 views