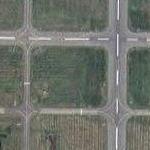 By kjfitz @ 2005-11-15 15:41:03
@ 45.145348, -93.209982
Blaine, Minnesota (MN), US
Serving one of the most rapidly growing portions of the metro area, Anoka County - Blaine Airport is the largest of the reliever airports. The facility serves the most diverse aircraft mix in the reliever system and is located 20 to 30 minutes from the business districts of Minneapolis and St. Paul. Corporate jet aircraft operators, recreational pilots and many antique aircraft owners call the airport home.

The airport supports more than 132,000 takeoffs and landings annually. There are 490 aircraft based at the airport.

Through a unique agreement, Anoka County has proposed leasing a 39-acre northwest building area for storage and commerical hangars from the MAC. The county could then sublease the acreage to a private developer, which would complete the site preparation, connect to sewer, water and storm sewers, and build alleyways and hangars. The county would need to build and maintain a road to the new building area and maintain all the improvements during the 28 to 30 year lease term.

Other planned improvements at the Anoka County-Blaine Airport include improved instrumentation, the possible addition of runways parallel to each existing runway, and an extension of the existing east-west runway to 5,000 feet. Development of aircraft hangar and storage on the east, west and possibly south sides of the airport are also possible in the future.
Links: www.mspairport.com
869 views