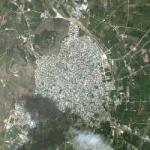 By kjfitz @ 2011-03-02 13:41:25
@ 37.635356, 22.729104
Argos, Greece (GR)
Argos is a city in Greece. A settlement of great antiquity, Argos has been continuously inhabited for the past 7,000 years, making it one of the oldest cities in Greece and Europe. At a strategic location on the fertile plain of Argolis, Argos was a major stronghold during the Mycenaean era. In classical times Argos was a powerful rival of Sparta for dominance over the Peloponnese, but was eventually shunned by other Greek city-states after remaining neutral during the Greco-Persian Wars.
Links: en.wikipedia.org
1,382 views