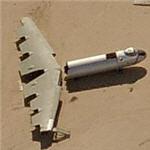 By kjfitz @ 2006-12-22 11:54:02
@ 32.137375, -110.868537
Tucson, Arizona (AZ), US
The B-36 is the largest bomber and the last piston engine powered bomber produced by the United States. First designed to meet a World War II requirement for a plane capable of hitting targets in Germany from bases in the United States the prototype did not fly until August 8, 1946. The development of the atomic bomb led the Air Force to conclude that it still needed a very long-range bomber capable of delivering the bombs over intercontinental ranges and production of the B-36 was continued despite the end of the war a year earlier. A total of 383 Peacemakers were built between 1947 and 1954. The era of piston engine powered bombers was coming to a quick end with the introduction of the all jet B-47 and B-52. The B-36 was the symbol of American air power in the first years of the Cold War, but even the addition of four jet engines could not bring the B-36 up to the performance standards of the newer aircraft and all of the B-36s were out of service by the first months of 1959.