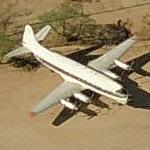 Service History:
This aircraft, the 40th one built, was the first Viscount in North America. It was delivered to Trans-Canada Airlines and was registered as CF-TGI. At 9 AM on April 18, 1955 Viscount number 40 became the first turbine-powered aircraft to fly a commercial revenue service in both Canada and the United States when it departed Toronto, Canada for New York City with forty passengers.
Links: pimaair.org
544 views