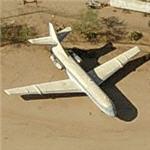 By kjfitz @ 2007-11-22 11:32:02
@ 32.138083, -110.868278
Tucson, Arizona (AZ), US
The Caravelle was the first jet airliner to be designed with the engines mounted on the rear of the fuselage. This made the cabin quieter and improved single-engine performance over aircraft with the engines mounted on the wing. It was also the first jet airliner produced in Europe outside of England. The aircraft was designed in response to a French government requirement for a medium range airliner for Air France. The first one flew in 1955 and entered service in 1959. The VI-R (6R) version of the Caravelle introduced thrust reversers and spoilers to improve landing performance. In September 2004 the last known flying Caravelle ended its final flight at Gisenyi, Rwanda.
Links: pimaair.org
490 views