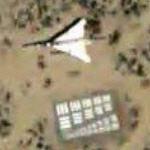 On October 17, 1958, Convair received a contract from Hughes and the USAF to manufacture two special pods for GAR-9 missile launch tests and to modify one B-58 for AN/ASG-18 test-bed work. Snoopy was selected for the modifications. In February 1959, it began modifications to begin life as a test bed.

In order to fit the rather large AN/ASG-18 fire control system into the B-58A, nearly seven feet had to be added to the overall length of the aircraft (that explains why it looks a little odd). Internal changes had to be made in the second crew station and elsewhere to accommodate the associated instrumentation and control equipment.


The flight testing of the radar began in early 1960, but the first GAR-9 launch did not take place until May 25, 1962. By late 1963, the YF-12A flight test program was sufficiently well advanced that it was concluded that it was now possible for future GAR-9 missile launches to take place from the YF-12A itself. The last B-58 GAR-9 launches took place in February of 1964.

After the completion of the ASG-18/GAR-9 test program, the special modifications were removed from Snoopy. However the long nose was retained. Snoopy was eventually placed out in the open on the photo test range at Edwards AFB. (note the photo resolution targets just to the south) [check-six.com]
Links: www.check-six.com
15,500 views