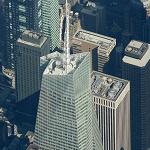 The US$1 billion project was designed by COOKFOX Architects, to be one of the most efficient and ecologically friendly buildings in the world. It is the third tallest building in New York City, after One World Trade Center and the Empire State Building, and the fifth tallest building in the United States. Construction was completed in 2009.
Links: en.wikipedia.org
651 views