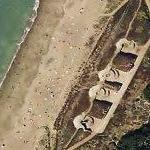 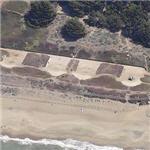 By kjfitz @ 2005-07-16 01:49:13
@ 37.793977, -122.482688
San Francisco, California (CA), US
This Endicott-era battery was
completed and armed in 1904 with four 6-inch guns mounted on disappearing carriages. The battery was built to protect underwater minefields laid outside the Golden Gate during the time of war against minesweepers and moderate-sized warships. These guns had a range of 9 miles and could fire at the rate of two rounds per minute. The original guns were dismounted in 1917 for use in World War I, but the battery was modified to receive two 6-inch guns on simple barbette carriages in 1920. During World War II, the Sixth Coast Artillery (Harbor Defense) Regiment, Battery "D," manned the two guns at Battery Chamberlin, which were placed under camouflage netting to hide them from potential air attack. In 1948, the Coast Artillery Corps was deactivated, the battery disarmed, and the guns scrapped during "Operation Blowtorch."
Links: www.nps.gov
968 views