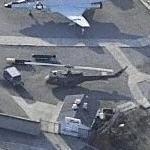 In Vietnam, 2,202 Huey pilots were killed and approximately 2,500 aircraft were lost, roughly half to combat and the rest to operational accidents.
Links: www.airliners.net
680 views