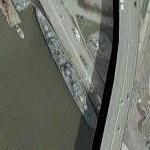 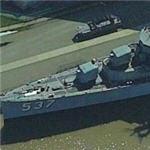 By kjfitz @ 2005-08-28 15:53:44
@ 42.875041, -78.878457
Buffalo, New York (NY), US
USS The Sullivans is named for five brothers who lost their lives in the Battle of the Solomon Islands when their cruiser, USS Juneau (CL-52) was sunk. She is an excellent example of the Fletcher class, the largest and most important class of U.S. destroyer in World War II, forming the backbone of destroyer forces throughout the war. The Sullivans served with distinction in World War II, taking part in intense combat, rescuing downed aviators, and earning nine battle stars for her service. After a Korean War deployment, the vessel was laid up. Acquired by the City of Buffalo, The Sullivans is displayed on the city's lakefront with USS Little Rock, USS Croaker, and an array of aircraft and military vehicles.
Links: www.ussthesullivans.net
1,003 views