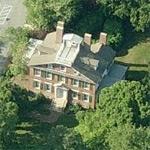 In 1971 it was added to the National Register of Historic Places.

Six hundred acres (240 ha) were granted to Henry Pearman by William Penn in 1684, and became known as "Pearman's Choice." A small brick house was built on this property. This house and two hundred acres were sold to Andrew Love in 1691. The property was bought by Thomas Collins, who would become High Sheriff of Kent County and later a brigadier general in the Continental Army, eventually rising to the governorship of Delaware. He added the present front about 1753. In 1777 a British party attempting to capture Collins shot a sentry posted on the widow's walk, who died in the room below. His death is commemorated by a plaque. Collins died at Belmont Hall in 1789
Links: en.wikipedia.org
647 views