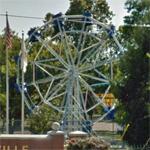 The text of the historic marker:
I have discovered the machine I want to design and build, a portable 'Ferris Wheel'', W.E. Sullivan, 1893.

A young man's dream became reality when W.E. Sullivan, of Roodhouse, Illinois, designed and built a small, portable, revolving wheel, patterned after the 'Ferris Wheel' at the 1893 World's Columbian Exposition in Chicago. He called his invention, 'Big Eli.'
On May 23, 1900, in the square of downtown Jacksonville, 'Big Eli' a 45' high 'wheel' made of twelve structural steel 'spokes' with carriage seats at their extremities, and supported by a steel axle, offered rides to all who dared to 'revolve' in the bridge-like contraption. It grossed $5.56 that day.

"Big Eli No. 17" was constructed in 1907 and was the 17th "wheel" built by Mr. Sullivan's manufacturing concern, Eli Bridge Company.

'Big Eli No. 17' thrilled crowds at amusement parks in Duluth, MN; Leavenworth, KS; San Antonio, TX; Guaymas, Mexico; and, Miami, FL. In 1957, No. 17 returned home to the Eli Bridge Company for renovation. Originally built with 10 seats, No. 17 was converted to a '12-seater' and sold to the Jacksonville Rotary Club. Rotary installed No. 17 in Nichols Park and operated it there until increased insurance costs forced its closure in 1985.

In 1986, the Rotary Club donated the 'Big Eli No. 17' to the City of Jacksonville. With the assistance of Eli Bridge Company, and private donations, the structure was renovated and re-erected at its present site. Big Eli No. 1 stands in the front yard of the Eli Bridge Company.
Links: www.elibridge.com
517 views

Anonymous
@ 2017-05-10 17:18:51
Jerry Zimmerman - Wisconsin State Fair Historian
Can someone please update me on the history of the Big Eli No. 17.
My information is it was at the Wisconsin State Fair Midway from about 1926-28 until 1959-60. I have a picture and brief article identifying it as being on the WSFP Grounds.

milwhcky
@ 2017-05-10 18:49:21
Jerry, have you tried contacting someone at elibridge.com? The historic marker mentions that it traveled to fairgrounds across North America, but I suppose it may have had a regular annual visit to West Allis. Feel free to provide a follow up comment here if you learn more about its history.

I stumbled across this display during a visit to Jacksonville in 2014.