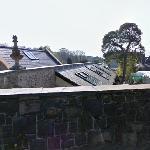 By kkeps @ 2010-05-25 19:15:30
@ 53.234737, -3.797594
Tal-y-Cafn, United Kingdom (GB)
This important garden occupies an area of over 80 acres surrounding Bodnant House, most of which was first laid out by Henry Davis Pochin, a successful industrial chemist, from 1874 onwards until his death in 1895. Bodnant House had been built in 1792 but was remodelled by Pochin and on his death it was inherited by his daughter (whose husband became the first Baron Aberconway in 1911). The garden, but not the House or other parts of the estate, was presented to the National Trust, with an endowment, in 1949. The House was the home of the late Lord Aberconway, and members of his family continue to be actively involved in the management of the garden, its tea pavilion and car parks on behalf of the National Trust.
Links: en.wikipedia.org
819 views