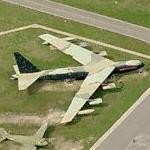 Beginning with the successful contract bid on 5 June 1946, the B-52 went through several designs, from a straight wing aircraft powered by six turboprop engines, to the final prototype, YB-52, which first flew on 15 April 1952.

Built to carry nuclear weapons for Cold War era deterrence missions, the B-52 Stratofortress replaced the Convair B-36. Although a veteran of a number of wars, the Stratofortress has dropped only conventional munitions in actual combat. With the longest unrefuelled range of any contemporary bomber, the B-52 carries up to 70,000 pounds of weapons.

The USAF has had B-52s in active service since 1955 with the Strategic Air Command which was absorbed into the Air Combat Command in 1991. Superior performance at high subsonic speeds and relatively low operating costs have kept the B-52 in service despite proposals to replace it with the Mach 3 XB-70 Valkyrie, supersonic B-1B Lancer and stealthy B-2 Spirit. In January 2005, the B-52 became the second aircraft, after the English Electric Canberra, to mark 50 years of continuous service with its original primary operator.
Links: en.wikipedia.org
827 views