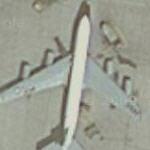 By kjfitz @ 2010-12-03 12:16:29
@ 25.135077, 51.315795
Ar-Rayyān, Qatar (QA)
The Boeing RC-135 is a large family of reconnaissance aircraft used by the United States Air Force to support theater and national level intelligence consumers with near real-time on-scene collection, analysis and dissemination capabilities. Based on the C-135 Stratolifter airframe, various types of RC-135s have been in service since 1961. Many variants have been modified numerous times, resulting in a large variety of designations, configurations, and program names.
Links: en.wikipedia.org
997 views