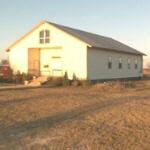 The Waco siege began on February 28, 1993, and ended violently 50 days later on April 19. The siege began when the United States Bureau of Alcohol, Tobacco and Firearms (ATF), accompanied by several members of the media, attempted to execute a search warrant at the Branch Davidian ranch at Mount Carmel, a property located 9 miles (14 km) east-northeast of Waco, Texas. On February 28, shortly after the attempt to serve the warrant, an intense gun battle erupted, lasting nearly 2 hours. In this armed exchange, four agents and six Branch Davidians were killed. Upon the ATF's failure to execute the search warrant, a siege was initiated by the Federal Bureau of Investigation. The siege ended 50 days later when a fire destroyed the compound when a second assault was launched. 76 people (24 of them British nationals) died in the fire, including more than 20 children, two pregnant women, and the sect leader David Koresh.