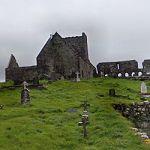 Burrishoole Friary was founded in 1470 by Richard de Burgo of Turlough, Lord MacWilliam Oughter. It was built without the permission of the Pope. In 1486, the Pope instructed the Archbishop of Tuam to forgive the Friars. Richard de Burgo resigned his lordship in 1469 and entered the friary he had founded where he remained a friar until his death four years later. This was not an uncommon occurrence and serves to illustrate the connection between patrons and their foundations at this time.
Links: en.wikipedia.org
534 views