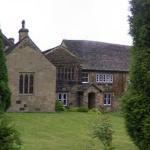 By LancelotLink @ 2010-08-25 05:43:41
@ 53.827438, -1.685082
Calverley, United Kingdom (GB)
Calverley Old Hall is a medieval manor house with Grade I listed building status situated at Calverley, West Yorkshire, England. Significant portions of the house have unusually escaped alteration and modernisation in later centuries. The oldest section of the property is the solar, believed to be of 14th-century origin. The great hall, which has an interesting 6-bay hammerbeam roof, and the chapel have been dated to 1485–1495. Later additions include an accommodation wing added in the early 16th century by Sir William Calverley to house his very large family.
Links: en.wikipedia.org
692 views