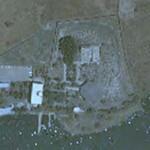 Josephus refers to Capernaum as a fertile spring. He stayed the night there after spraining his ankle. It is located in northwestern shore of the Kinneret. A church near Capernaum is said to be the home of Peter himself. Recent excavations have revealed that there are actually two synagogues. The more recent is made of limestone and stands atop the older made of local black basalt. The Romans never came to Capernaum. Of the earlier structure only foundation walls, column and a cobblestone floor are the only things that remain. Capernaum started out as a fishing village, and was inhabited from the 1st century AD to 13th century AD. It had a population of 1,500. There was a small amount of room here but enough room for a synagogue. When Jesus abandoned Nazareth he went to Capernaum and made it into his home. In Capernaum he chose his first four disciples which are followers. Their names were James, John, Peter and Andrew. (Their Hebrew names were יַעֲקֹב, יוֹחָנָן, כֵּיפָא and אַנְדְּרֵי.) During the first Jewish revolt Capernaum was not damaged, and this revolt happened during 66-70.

The town is mentioned in the New Testament: in the Gospel of Luke it was reported to have been the home of the apostles Peter, Andrew, James and John, as well as the tax collector Matthew. In Matthew 4:13 the town was reported to have been the home of Jesus. According to Luke 4:31-44, Jesus taught in the synagogue in Capernaum on Sabbath. In Capernaum also, Jesus healed a man who had the spirit of an unclean devil and healed a fever in Simon Peter's mother-in-law. According to Matthew 8:5-13, it is also the place where a Roman Centurion asked Jesus to heal his servant. A building which may have been a synagogue of that period has been found beneath the remains of a later synagogue.
Links: en.wikipedia.org
2,127 views