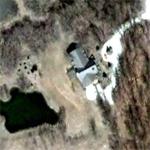 Carey's son Colin is playing in the NHL for the Nashville Predators. Colin grew up in this home before attending Boston University in 2007 and beginning his pro career two years later.

Carey's father Jerry (aka Gerry) played three NHL games with the Montreal Canadiens in 1956-57. Knee injuries forced him to retire in 1960, and he then began studying to become an orthopedic doctor. He was employed as the team doctor for the Winnipeg Jets in the 1970's.
Links: en.wikipedia.org
1,164 views