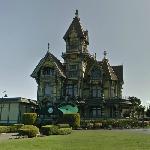 By Mike1989 @ 2013-03-24 06:24:59
@ 40.805315, -124.158879
Eureka, California (CA), US
The Carson Mansion is a large Victorian house located in Old Town, Eureka, California. Regarded as one of the highest executions of American Queen Anne Style architecture, the home is "considered the most grand Victorian home in America." It is one of the most written about and photographed Victorian houses in California, and perhaps, in the United States. Originally the home of one of Northern California's first major lumber barons, it has housed the Ingomar Club, a private members-only club, since 1950. Although the front and south-side elevations may be viewed easily from the public street and sidewalk, the home and grounds are never open to the general public.

The design of the house is prevalent in website design, video animations, posters, paintings, book covers and includes renditions in amusement parks, including the clock tower on the train station at Disneyland. The home also serves as a model for haunted house art work and design.
Links: en.wikipedia.org
1,340 views