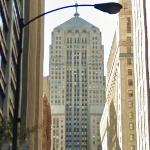 By kkeps @ 2009-12-23 20:25:15
@ 41.880678, -87.632437
Chicago, Illinois (IL), US
The Chicago Board of Trade Building is a skyscraper located in Chicago, Illinois, United States. It stands at 141 W. Jackson Boulevard at the foot of the LaSalle Street canyon, in the Loop community area in Cook County. Built in 1930 and first designated a Chicago Landmark on May 4, 1977, the building was listed as a National Historic Landmark on June 2, 1978. It was added to the National Register of Historic Places on June 16, 1978. Originally built for the Chicago Board of Trade (CBOT), it is now the primary trading venue for the CME Group, formed in 2007 by the merger of the CBOT and the Chicago Mercantile Exchange.

The 141 W. Jackson address hosted the former tallest building in Chicago designed by William W. Boyington before the current Holabird & Root structure, which held the same title for over 35 years until being surpassed in 1965 by the Richard J. Daley Center. The current structure is known for its art deco architecture, sculptures and large-scale stone carving, as well as large trading floors. A three-story art deco statue of Ceres, goddess of agriculture (particularly grain), caps the building. The building is a popular sightseeing attraction and location for shooting movies, and its owners and management have won awards for efforts to preserve the building and for office management.
Links: en.wikipedia.org
1,665 views