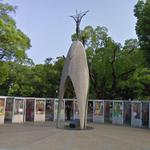 By adrbr @ 2011-05-26 16:54:42
@ 34.394065, 132.452884
Hiroshima, Japan (JP)
The Children's Peace Monument (原爆の子の像, Genbaku no Ko no Zō?) is a monument for peace to commemorate Sadako Sasaki and the thousands of child victims of the atomic bombing of Hiroshima, and is located in Hiroshima Peace Memorial Park, itself in the city of Hiroshima. Designed by native artists Kazuo Kikuchi and Kiyoshi Ikebe, the monument was built using money derived from a fund-raising campaign by Japanese school children including Sadako's classmates, with the main statue entitled 'A-bomb Children' being unveiled on the 5th of May, 1958, or (Children's Day in Japan).
Links: en.wikipedia.org
839 views