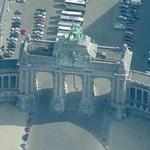 By DonMartini @ 2008-01-04 11:39:50
@ 50.840369, 4.393204
Brussels, Belgium (BE)
The Arch was planned for the world exhibition of 1880 and was meant to commemorate the 50th anniversary of the independence of Belgium. In 1880, only the bases of the columns had been constructed and during the exhibition the rest of the arch was completed with wooden panels. During the following years, the completion of the monument was the topic of a continuous battle between king Leopold II and the Belgian government, who did not want to spend so much money on it. The monument was finally completed by way of private funding in 1905, just in time for the 75th anniversary of the Belgian independence.
Links: en.wikipedia.org
650 views