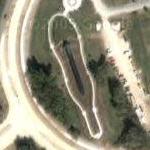 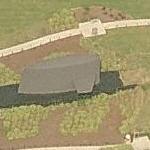 The 55-ton sail and fairwater planes from the decommissioned USS Lewis and Clark are set on a black stone base, the plantings around it giving the effect of the wake of a submarine. The rudder from the sub completes the memorial. The sail is the vertical tower atop a sub, while the planes are the wings on either side.

USS Lewis and Clark (SSBN-644), a Benjamin Franklin-class ballistic missile submarine, was the first ship of the United States Navy to be named for the explorers Meriwether Lewis and William Clark.

Her keel was laid down by Newport News Shipbuilding and Dry Dock Company of Newport News, Virginia, on 29 July 1963. She was launched on 21 November 1964 commissioned 22 December 1965 with Commander John F. Gagan, Jr., in command of the Blue Crew and Commander Kenneth A. Porter in command of the Gold Crew.
Links: www.cwsmf.org
3,145 views