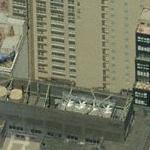 By ABCD @ 2010-07-24 14:33:33
@ 40.71418042, -74.00978671
New York, New York (NY), US
Cordoba House is a highly controversial proposed Islamic cultural center and mosque planned to be built in New York City on the north side of Park Place between West Broadway and Church Street, two blocks away from Ground Zero, despite protests. Controversial Imam Feisal Abdul Rauf is behind the plans for the center.

The current 5-story building that exists at the site (which used to be a Burlington Coat Factory before the WTC attacks and remained vacant afterwards), was purchased by Soho Properties, a Muslim-run real estate company for $4.85 million would be raised to make way for the planned 13-story center.
1,346 views