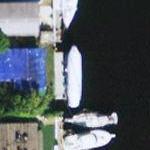 By kjfitz @ 2008-08-15 14:03:15
@ 26.125696, -80.12018
Fort Lauderdale, Florida (FL), US
The plane-boat started its improbable journey as a Boeing 307 Stratoliner originally owned by industrialist and aviation pioneer Howard Hughes who acquired the plane in 1939 as part of his purchase of TWA. The 307 was the world’s first commercial pressurized aircraft that was a variant of the B-17 Flying Fortress. Only ten were built in the late 1930s as production was discontinued by government order at the outbreak of World War II in September 1939. (One 307 has survived fully intact and has undergone a complete restoration by Boeing in Seattle for its owner, the National Air & Space Museum).
Links: www.planeboats.com
1,630 views