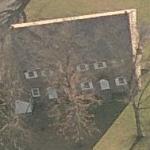 "Quakers settled Crosswicks in 1677 and purchased this land toward the end of that century. Friends have worshiped on this site continuously since that time. The smaller building was erected in the mid 1780's for use as a Quaker school and is now used as a First Day (Sunday) school and gathering place.

During the Revolutionary War, the meetinghouse was occupied at various times by both Colonial and British forces, though meetings for worship were still held.
Use as a wartime barracks was a challenge to the Quakers as it was in such contradiction to our peace testimony.

The meetinghouse is in the National Register of Historic Places. With its cedar interior and hand wrought nails, it was built in 1773 at a cost of £750 ($3750).

It is the third meetinghouse built on the property, the first having been built of log construction in 1693.

Friends hold, as the basis of our faith, the belief that God endows every human being with a measure of Divine Spirit which may be experienced directly. This is often called the Light Within.

Our manner of worship is an outgrowth of this belief. We gather in quiet assembly, mindful of the words, "Be still, and know that I am God." We wait in anticipation of the Spirit of God which may move one or more of the worshippers to give vocal ministry.

Quakers today continue to live a witness of simplicity and social
consciousness, working for peace and justice among nations and within families."
Links: www.revolutionarywarnewjersey.com
714 views