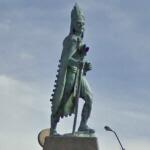 Cuauhtémoc was the last native ruler of the Aztecs and their city Tenochtitlan, which the Spanish conquistadors renamed Ciudad de Mexico (Mexico City). He was executed by the Spanish in 1525 and is today considered a hero who fought bravely against the foreign invader and died for his people.
Links: en.wikipedia.org
696 views