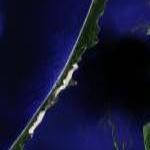 The Curonian Spit is a sandy peninsula that separates the Baltic Sea and the Curonian Lagoon. It stretches in a slightly concave arc for a distance of 98km (52km in Lithuania, 46km in Russia) from the Kaliningrad peninsula to the town of Klaipeda, and it varies in width from 0.4 to 3.8km. which stretches for 72km and varies in width between 250m and 1.2km. The average height is 35m, but in places the dunes rise to more than 60m. Dune valleys divide the ridge into separate dune massifs, and capes are generally formed in front of these valleys. At the present time more than half the ridge is forested.

The most significant element of the Spit’s cultural heritage is represented by the old fishing settlements. The earliest of these were buried in sand when the woodland cover was removed. Those that have survived since the beginning of the 19th century are all to be found along the coast of the Curonian Lagoon. At the end of that century more elaborate buildings – lighthouses, churches, schools, and villas – began to be erected alongside the simpler vernacular houses. This was due in part to the fact that the Spit became a recreational centre: Juodkrante became famous as a health resort as early as 1840 and Nida, Preila, and Pervalka were given official recognition in this category in 1933.

The Curonian Spit is shared by both Lithuania and the Russian Oblast of Kaliningrad.
Links: www.nerija.lt
1,743 views