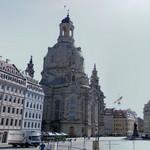 Built in the 18th century, the church was destroyed in the firebombing of Dresden during World War II. It has been reconstructed as a landmark symbol of reconciliation between former warring enemies. The reconstruction of its exterior was completed in 2004, its interior in 2005 and, after 13 years of rebuilding, the church was reconsecrated on 30 October 2005 with festive services lasting through the Protestant observance of Reformation Day on 31 October.

Once a month, an Anglican Evensong in English is held in the Church of Our Lady, with clergy sent from St. George's Anglican Chaplaincy in Berlin.
Links: en.wikipedia.org
916 views