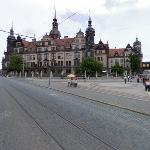 The original castle was a Romanesque keep, built around 1200. It was extended between 1471–1474 by the master-builder Arnold von Westfalen. In the middle of the sixteenth century an addition in the Renaissance style was added, and, after a big fire in 1701, Augustus II the Strong reconstructed much of the castle in the Baroque style. Additionally, the collection-rooms, placed in the western wing, were created at this time during two periods. In the first period (1723–1726) the Silver Room, Heraldic Room" and the "Pretiosensaal" arose, whereas in the second campaign (1727–1729) the "Kaminzimmer", "Juwelenzimmer", Ivory Room and Bronze Room were built. At the turn of the twentieth century a reconstruction in the Neo-renaissance style took place and afterwards various modernizations were undertaken, such as the installation of underfloor heating and electric lights in 1914.

Most of the castle was reduced to a roofless shell in the air attack (Bombing of Dresden in World War II) on February 13/14 1945. The Heraldic Room, Jewel Room, Silver Room and Bronze Room were all destroyed. Fortunately the collections survived, having been taken to the Königstein Fortress in the early years of the war.

In the first 15 years after the end of the Second World War no attempts were made to restore the building except the installation of a temporary roof in 1946. During the 1960s, the reconstruction began with the installation of new windows. Since then an amazing amount of restoration has occurred. The famous "Grünes Gewölbe" (Green Vault) was reopened in 2005 containing, among other priceless items, the treasures of the Saxon Monarchy. The rebuilding of the castle is not yet complete