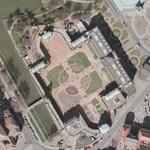 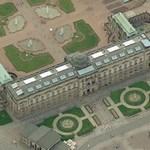 The name derives from the German word bezwingen (to conquer). The location was formerly part of the Dresden fortress, comprising an inner and outer wall. In the space between them a possible invader was meant to be conquered by gun fire if he had successfully taken the outer wall.

Augustus the Strong, elector of Saxony, returned from a grand tour through France and Italy in 1687–89, just at the moment that Louis XIV moved his court to Versailles. On his return to Dresden, having arranged his election as King of Poland (1697), he wanted something similarly spectacular for himself. The fortifications were no longer needed and provided readily available space for his plans. The original plans, as developed by his court architect Matthäus Daniel Pöppelmann before 1711, covered the space of the present complex of palace and garden, and also included as gardens the space down to the Elbe River, upon which the Semper opera house and its square were built in the nineteenth century.
1,197 views