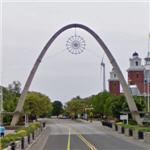 By kjfitz @ 2009-10-07 16:29:14
@ 43.634029, -79.425471
Toronto, Canada (CA)
The Dufferin Gates are the western-most pedestrian entranceway to the CNE grounds. Named after Lord Dufferin, the original gate to the CNE grounds was named in his honour, situated at the bottom of Dufferin Street. The original gateway was erected in 1895, and was superseded by a more permanent, ornate Beaux-Arts style triumphal arch built in 1910, and officially re-opened by Lord Dufferin in 1914.

When Toronto's Gardiner Expressway was built in 1956, the gates had to be demolished in order to make way for the roadway. In their place a modernist-style parabolic arch was erected 50 ft (15 m) south of the previous gates in 1956, designed Philip R. Brock. The current arch is built around a steel frame and concrete, with brick at the base. It is 65 ft (20 m) high and spans 74 ft (23 m) in width. The star decoration that hangs from the top of the arch was added during Canada's centennial celebrations in 1967.

A plaque from the Ontario Heritage Foundation commemorating the history of the CNE can be found just inside the gate.

TTC Route 29, originating at Wilson Station heads down to this entranceway from the Dufferin TTC station.
Links: en.wikipedia.org
861 views