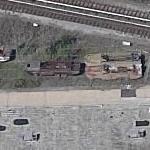 By AlbinoFlea @ 2006-02-17 10:35:41
@ 38.924914, -76.994048
Washington, Washington, DC (DC), US
These old DUKWs are being scavenged for parts by Historic Tours of America, which uses them to restore and maintain their fleet of DC DUCKS amphibious tour vehicles. They can be seen out the window when riding the Red Line between Rhode Island Avenue and Brookland/CUA stations.

Ducks come from DUKW, a military acronym that designated the vehicle as amphibious military personnel carriers. D Stands for the year it was designated, 1942; U for its amphibious nature; K for its all-wheel drive; and W for its dual rear axles.

DUKW's were created following the attack on Pearl Harbor as a means to transport supplies from ships to areas that did not have port facilities. DUKW's were first used operationally during the invasion of Sicily. Nearly 90% of all supplies came in by DUKW on the vital second and third days of the invasion. D-Day brought a force of 2000 DUKW's to the Normandy coasts. The fleet was an essential element in the strategic surprise of the enemy which assumed the Allies needed a port to make an effective landing. DUKW's are standard 2 1/2 ton GM trucks in a water-tight shell with an added propeller.

Climb aboard an authentic, fully restored 1942 "Duck" and let the adventure begin! From Union Station we'll waddle down to the mall where you'll see the awe inspiring monuments and fabulous Smithsonian Museums. Then at the Potomac River you'll splash down for a whole different look at the nation's capital. From the land to the water, it's ALL IN THE SAME VEHICLE!

Many DUKWs are still in use, primarily as tourist transport in harbor and river cities such as London, Boston, Philadelphia, Pittsburgh, Baltimore, Wisconsin Dells, Seattle, Halifax, Nova Scotia, San Francisco, Dublin, and Liverpool (UK). The Boston Red Sox celebrated their 2004 World Series victory with a parade of 17 DUKWs carrying members of the team over land and across the Charles River.

Almost all have been repainted, and given modern diesel engines and enclosed tops, making them more resemble conventional buses. Most require a bus-type Public Service Vehicle license and a passenger-use boat license.
Links: www.historictours.com
1,795 views

Anonymous
@ 2006-04-03 16:13:47
DUKWs played a pivotal part during the UK Nuclear Tests at Christmas Island in the South Pacific in the fifties. Their primary function was to bring perishible provisions ashore from the RFA cargo ships. In addition, they were taken (on board an LST) to ferry vital equipment to some of the surrounding islands which were used as weather stations. The fact that they could inflate and deflate their tyres enabled the DUKWs to be driven across the razor-sharp coral which surrounded many of these isolated outposts.