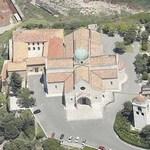 By DonMartini @ 2007-01-23 09:02:49
@ 43.626141, 13.510871
Ancona, Italy (IT)
The beautiful Cathedral, entitled to St. Ciriaco, was consecrated in 1128 and completed in 1189. Some writers suppose that the original church was in the form of a Latin cross and belonged to the 8th century. An early restoration was completed in 1234. It is a fine Romanesque building in grey stone, built in the form of a Greek cross, with a dodecagonal dome over the center slightly altered by Margaritone d'Arezzo in 1270. The façade has a Gothic portal, ascribed to Giorgio da Como (1228), which was intended to have a lateral arch on each side.

The interior, which has a crypt under each transept, in the main preserves its original character. It has ten columns which are attributed to the temple of Venus, and there are good screens of the 12th century, and other sculptures. The church was carefully restored in the 1980s.
696 views