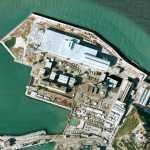 It designs and builds merchant vessels, passenger ships, offshore, and naval vessels, and is also active in the conversion and ship repair sectors. The company also owned Grandi Motori Trieste, which constructed marine diesel engines, but this was sold to Wartsila in 1999.

Originally founded in 1959 as Società Finanziaria Cantieri Navali – Fincantieri S.p.A. as a State financial holding company, part of IRI, the company became a separate entity in 1984.

Today Fincantieri is one of Europe's largest shipbuilding groups and the largest in the Mediterranean.

In Italy Fincantieri employs a staff of nearly 9,400 (rising to approximately 20,000 if the supply chain is included) working at 8 shipyards, two design centres, one research centre and two production sites for mechanical components.